Dear Fans of The Glazov Gang,

We are so grateful to all of you for helping us to keep going. The Glazov Gang is, after all, a fan-generated show and it is only because of you that we are able to produce our programming.

The Glazov Gang is the program that boldly tells the truth about the Left and Islamic Jihad that our establishment media and higher culture simply won’t dare discuss. And so it is no surprise that the crowdfunding online company GoFundMe has banned us from accepting online donations and that YouTube repeatedly shuts down our monetization.

The Muslim Brotherhood front-group CAIR leads the Unholy Alliance’s war against The Glazov Gang. The Hamas-linked group sends out press releases pressuring groups to cancel their events featuring our producer Aynaz Anni Cyrus. In its attack on Anni, one of CAIR’s typical press releases went into a listing of many of the things that our courageous producer has been saying in her Glazov Gang videos — a tell-tale sign that CAIR is watching our show and fretting about the truth that we are getting to the public.

The leftist and venomous hate-group, Southern Poverty Law Center (SPLC: Hate Machine), is also consistently libeling Anni, referring to her, among other things, as being “anti-Muslim.” The specious absurdity of this libel is unveiled when one considers all the suffering Muslim people under Sharia that Anni and our show consistently stand up for, especially when it comes to theMuslim women and girls who are victimized by FGM, Honor Killings and other Sharia barbarities. Hate groups such as SPLC and CAIR always smear heroic human rights activists such as Anni as being “anti-Muslim,” when they are, in fact, anti-Sharia oppression and anti-Jihad.

It is no wonder that groups such as SPLC and CAIR are panicking about Anni Cyrus and The Glazov Gang, seeing that one of Anni’s videos, The Solution to Stop Islam, has gone viral and is now nearing 1.5 million views.

And so, as this time of year has arrived, when we need to reach out for assistance to keep going, we hope our fans could give us a boost through this new newf1fund.com campaign.

(Those supporters who would like to write a check, kindly contact Jamie for more info at: jamieglazov11@gmail.com.)

We are immensely grateful for your support!

Thank you Mitchell Langbert so much for your generous donation! We are so very grateful. May God bless you. Best, Jamie.

Dear Eve H. Buchanan-cates, John Annicchiarico and Abe Berkowitz: Thank you so much for your generous donations to The Glazov Gang! We are very grateful!

Help us by spreading the word!

Help this fundraiser by getting your friends and family involved!

Copy and paste this URL into a new text message to send! 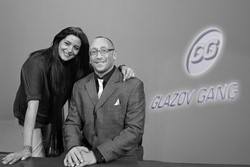 Enter your name:
Enter the email address to invite:
Join the team for Help Keep the Glazov Gang Alive!

As a team member you will be able to create your own account, share this campaign uniquely with a personalized message and be able to track your contributions through your own campaign dashboard.